The Maidens and Wrecks of Larne

Located at the North East of Belfast this site has been overlooked by our club in recent years. However,  a successful AD trip by Jim O’Connell has shown that this site has some fantastic dives and has been under exploited in our club. There are stunning walls, panicles, and wrecks to be had often in the same dive. And as the M1 motorway is so good it’s an easy tow up for a short weekend dive. The main point to take into account when organizing a trip here is to organize it around tides. All dive sites are very tidal and are best dived at slack and on neaps.

Jim O’Connell organized a dive here in 2015 and will be happy to give you advice about the area. The local dive club Castlereagh SAC will provide local knowledge  http://www.csac.co.uk. And a local dive school northern ireland divers can be reached at caroline.steele@btconnect.com if you plan to take a hard boat or use their compressors.

It’s a surprisingly short auld hop up to Larne towing the boats. Taking 3 hours on motorway at a fairly relaxed pace.

The best place to launch from is Ballylumford slip next to the power plant. This is a fantastic slip that does not dry out at low tide. It is very deep so I’d bring extra rope as the bow and stern line can not reach up to the rings by the slip. Mooring the boat may be attempted by attaching extra rope to the bow and painter and tying it across the harbor as shown in the picture. It may be easier just to take the boats out of the water overnight though 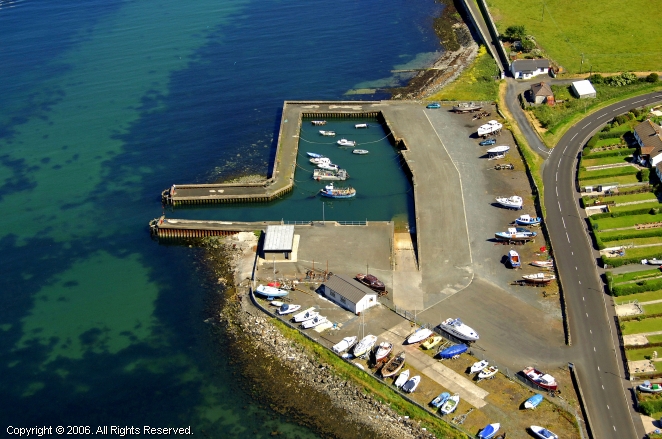 If launching from here you must contact Larne Port control prior to entering the shipping channel. Their frequency can be noted as it is on a sign at the slip and it is also noted on a bouy as you leave the harbor to your starboard.

Other launch sites include the Slipway in Ballygally. This is to the north of Larne, it is a much smaller slipway and may not be diveable at any tide. It is however closer to the site.

The slipway in Whitehead is a third option. It has mooring bouys for visitors so the boats can be left overnight. It does dry up at low tide though,

We stayed in a small house found on DiscoverNorthernIreland.com on Islandmagee. This was suitable for 6 people at most with people sharing beds, hot showers and plenty of room for several boats and compressors. You can reach them on rachael@trevstours.co.uk. On a side note their son is currently building a custom motorcycle disigned to break the land speed record on the bonaville salt flats in USA.

Hopefully they should have broken the record by the time we next dive.

Other places to book include www.northirishlodge.com which doubles up as a dive centre and fishermansleap@portmuck.fsworld.co.uk. Both of which need to be booked early.

This is a steam tanker that sank in 1908. There is some debate over whether this only the Housatonic or if it’s the SV Sumatra which sunk near by. The wreck lies to the north east of Russels Rock ( which is submerged at full tide) just on the shoulder between Russel’s and Allen’s rock. It is very broken up but there is plenty of life. if you follow a trail of broken metal down to 30m you will find the boiler. Following it you can follow a lovely sloping wall that drops to 45m on your right.  Expect to see seals on your dive as they use near by Allen rock to relax.

Slack is one hour before HW or LW

As the wreck is very flat it is hard to pick up on sounder but is hard to miss when underwater if you follow the wall. The photo below shows where we shotted the wreck in relation to Allen rock.

This is a site that hasn’t been dived yet but from information from local dive clubs it seems promising. It is a steam coaster that was sunk in 1916. It’s broken up and is located on the north side of the east light house on south maiden.

This is a fantastic dive located off hunters rock. It can only be dived on slack and has a very small slack window. During springs there is only a half an hour of slack but this goes up to 90min during neaps. There are three buoys on the SoL and they will only appear during the slack window. One of these buoys may be a lobster kreel however if it is followed it should take the diver to the wreck. It may go down to 35(ish) metres.

If you tie up to any of the buoys I  would also suggest that you watch the end of slack water as the buoy will be pulled down underwater and if you haven’t removed your bowline you’ll have to cut yourself free.

Slack is 30 min before HW or LW. The best thing is to do is get there early and wait for the slack bouys to appear. If you get impatient Hunter’s rock is a lovely pinnacle dive.