The Saltee Islands lie about five kilometres south of Kilmore Quay which is twenty-three kilometres from Wexford. The islands are a well known bird sanctuary. We dive around the islands at least once a year as they’re only a few hours from Dublin and the diving is superb. As the area is situated at the south-eastern corner of Ireland, tidal currents affect diving in the area. Due to these currents and the depth of many of the sites, this area is only suitable for sports divers who’ve gained a little experience since getting their sports diver grade. Kilmore Quay is a busy fishing port and holiday area with good all weather launching slips, toilet facilities and parking. The locals are used to divers and you can hear some great chatter from the local fishermen over the radio while waiting for your divers to surface!

Lots of people have organised trips here over the years. John Allman, Beth, Sarah Doyle, Amanda or Stephen Park to name but a few. Most recently Will Lee organised (but missed) a trip here in August 2006. There’ll be no shortage of expertise anyway! 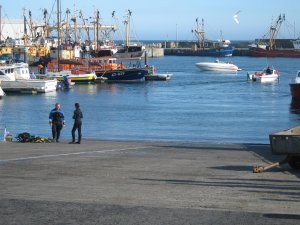 As it’s the main fishing port in Wexford try to launch and retrieve boats promptly as there are a lot of people looking to use the slip.

The sites are all reasonably close to Kilmore Quay, the furthest away being Coningbeg Rock and the wreck of the Lismore, which are both around 6 nautical miles from the harbour. The tidal currents can be quite strong and unpredictable around the Saltee Islands so if possible dive on neap tides. Having being spat off the Coningbeg Rock at high velocity we’ve learnt about the tides the hard way! Two hours (or slightly more) before Kilmore Quay high water and low water seem to be the earliest one can safely put divers in the water. Tide times can be obtained from the harbour master, Matt at the pier house hostel, or on the UKHO site (Great Saltee times).

In August 2006 we dived on 1.8 metre neap tides. We found that, (doing two waves), dropping our first pair of divers in a little over two hours before Kilmore Quay high water and low water gave all divers slack for dives on the Coningbeg Rock, the West Brandy and the Lismore.

Except for the Lismore, travel to all sites between the Saltee islands. Stay mid-channel as submerged rocks extend quite far out from both islands.

The Underwater Ireland site has some brief site descriptions as well as a map of the area.

Coningbeg rock is fully submerged at high water, which can make it hard to find on a flat calm day. However, the slightest swell means that the sea can be seen breaking over the top. It is very easy to find depths up to 45m here, although the impressive rock formations also allow great shallow dives. The remains of a lighthouse may be seen around the bottom as well as parts of an unknown wreck. A good place to drop divers is on the landward side of the rock. We dropped divers landward and seaward and they all reported a superb dive. The rocks are covered with all sorts of coloured anemones. Large wrasse of all types curiously stare at you as you descend into the depths, swimming amongst ling, pollack and bib. Lobsters, spider crabs and congers all await you at the bottom, happily moving about in the light as if they don’t have a care in the world. The rock is covered with large gullies through which the currents will gently pull you along. This has got to rate amongst the most beautiful Irish scenic dives. However, it must be noted that strange currents may be encountered at all depths, including up and down currents, making decompression a tricky business, and to be avoided if possible. Slack is a must.

On our recent visit, the rock was surrounded by inquisitive seals bobbing about on the surface on the seaward side of the rock. None were spotted underwater though.

This is the larger of the 2 Coning rocks. It can be seen as it lies above water. The area is full of seals, which can be observed underwater close to the rock. The general depth is around 20-30m with good fish life and rock formations. This is a slack water dive. The last set of DUSAC divers to drop in here reported that it was a nice dive but a bit on the boring side. They recommended that it be ignored in favour of some of the more fabulous dives in the area.

The Brandies are a pair of rocks south of the smaller Saltee island. We have mainly dived the western rock which is a little more visible on the surface. We have dived the landward (northerly side) mostly though on a recent trip we put divers in on the seaward side as well. It is a really pretty scenic dive teeming with life with interesting rock formations, gullies and boulder fields. Expect to dive between twenty and thirty metres. Here is a dive Andy T did:

We dropped in close to the rock, which was showing about 2m above the surface, and worked our way down and roughly north. Initially, we found a series of narrow gullies running down from the rocks. These opened out into a rocky slope. The rocks were covered in jewel anemones, dahlia anemones and other anemone species. Near where we dropped in we came across a pair of dozing dogfish, and a number of large spider crabs, edible crabs and other crustaceans. As we worked north, we came to a broad east-west gully in the rocks that allowed the tide through. Here there were hundreds of wrasse of different species, finning about in the current, and a shoal of large sinister-looking pollock hovering downstream. Choosing to stay out of the tide, we turned round to work our way back south and up the rocks (depth was about 25m here) to where we’d dropped down. As we went, we found a lobster and two large crayfish hiding under boulders – they’d sensibly vanished before the next divers went in.

One thing to note is that there are a couple of large submerged rocks close to the main rock, so take care when picking up and dropping divers. As with the other scenic dives be wary of currents. Most recently we had no currents diving two hours before low water. Previously we dived a little before low water when the tide was still going out, but had no problems with the current as we kept to the sheltered side of the rocks. Delayed SMBs should be carried, though.

An alternative second dive site would be the nearby East Brandy. This apparently doesn’t drop at such a sheer angle as West Brandy, but has the wreck of the Verfradio at 20m.

Two congers on the Lismore

The wreck of the Lismore lies in 35m(LW) / 38m(HW) of water. It is approximately six nautical miles south-west of Kilmore Quay (half way between Kilmore Quay and Hook Head in fact). The wreck is well broken up but it never fails to impress and it’s always a really great dive. The last few times we’ve dived it there was a shot line attached to the boilers near the centre of the wreck. Diving from 2.25 hrs before HW until about an hour before high water we experienced currents at the top of the shotline but slack (and later a faint drift) on the wreck itself.

To get to the stern you should see the drive shaft extending along the bottom leading to the props beneath the stern. If you’re planning on doing the bow and you see a long cylindrical pipe, turn back, you’re heading towards the stern! Along the way you may spot bollards and metal plates until the impressive stern rises tall out of the sand. The stern section is stuffed full of fish life, congers, bib, whiting and pollack.

Heading off towards the bow there is extensive wreckage scattered around with a few pieces making swim-throughs for those that dare. The bow section forms a small enclosed room that teems with fish life including wrasse, pollack, bib and ling. It is possible to do numerous swim-throughs at this point. The wreck is also covered in lobsters, crabs and many conger eels of all sizes, from very small to enormous. There is a huge boiler sitting on the seabed as well with lots of holes of varying sizes. These were filled with life.

Due to the strange currents about the wreck, this dive should only be undertaken by adequately trained divers who are able to deal with varying conditions. It is not unusual to have a current running on the shot line with little or no water movement on the bottom. While the wreck itself is not a challenging dive, it is on the very limits for sports divers.

More of a second dive really. The boilers are the highest point, about four metres high. Wexford SAC usually puts a marker buoy on it each year. S.S. Lennox is a steamer lying in 10-18m at the back of the Great Saltee. the wreck lies parallel to the Collough Rocks with it’s bow pointing out to sea. This site is suitable for novice divers and is well dived by local club for training and pleasure. Bows broken but small bits still stand. The wreck is well broken up and is mostly covered in kelp making divers wonder if they have actually found it. However, closer examination soon reveals that the wreck is scattered everywhere. The S.S. Lennox was sunk when she was chased by a submarine onto the rocks at the Great Saltee. Built in 1895 by Barclay Curle & Co. Glasgow, she grossed 3,677 tons and measured 107.44 x 13.46 x 7.72m and was powered by a 3 cylinder triple expansion engine. Kilmore Lifeboat rescued the crew of 45. Will come under the 100 year rule in 2016.

Other dives nearby include Makestone Rock and West End, neither of which we have dived in recent years.

Be prepared for currents and dive on slack. At least one delayed SMB per pair of divers is a must. When driving between the Saltees be careful to stay mid channel as submerged rocks extend quite far into the channel from both sides.

There are no fills available locally.