The Blaskets offer some of the best diving in Ireland. Yes, they are far away, and yes, they are exposed to big westerly swells but if you get the weather they offer absolutely sensational diving. The topography above water is nearly as impressive as the Skelligs, sea life is abundant and it is tailor-made for big day trips, exploring the uninhabited islands between dives. In addition having access to both sides of a headland means there will normally be shelter and diving available.

Towing time is about 5 1/2 hours with usually some traffic problems in Adare. Do not go over the Conner Pass with a Boat – its very narrow indeed. All the roads that bisect the Peninsula are too narrow for a boat (as JK and JM have discovered over the years) so take the long way around if it comes to it.

There is a great slip all-weather, all-tide slip in Dingle (you will need a code to access it). There’s a cost to launch and moor in Dingle – the Harbour Master Nigel Collins (066 9151629) was very helpful the Marina Superintendent Peter Regan (087 9254115) must be contacted before using the facilities. 2019 Rates were €5 to launch/retrieve per boat per day, and an overnight rate of €2 per meter in length (minimum of €15).

There is also a slip in Smerwick (Wine Strand) on the north side of the Peninsula, that is steep but usable at all states of the tide except very low water. It is exposed to a westerly swell. The end of the slip has about a 3 inch drop and then sand. It’s usable with people in the water to hold the boat while others are loading. Challenging with a bit of a surge but manageable if you can have an efficient turnaround. 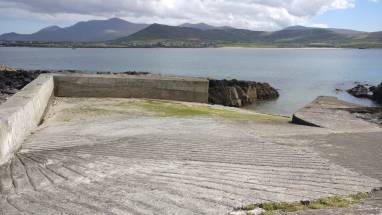 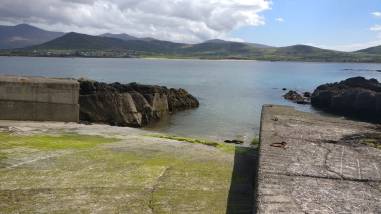 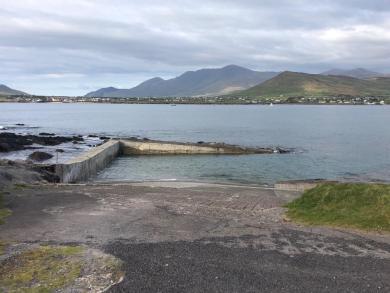 There is a slip in Ventry on the southern side. On neaps, this is usable up to an hour before low water but, owing to the construction of a wall on the end of the slip will require some involved launching and adroit positioning of the towing car at lowish water. The 2019 trip took place during a spring tide and launching 2 hours ahead of LW was just about manageable. Advisable to avoid launching here within 2.5 hrs either side of LW on springs. There were some local moorings but the boats were anchored just out from the pier overnight (2019). Kerry County Council are the official people to contact regarding moorings here, you can get the local office on 066- 915135. There was also a hefty chunk of the slip missing on the open side, extra care required to ensure jeep + trailer pass over it safely.

Nearest Petrol station is in Dingle.

We (2011) dives in a Northerly wind on the Blaskets so only dived in the lee. There does look like there is great diving on the northern side of Tearaght and Great Blasket but we didn’t get to do any of it.

This is very similiar to the Skelligs – great diving if possibly a touch less life than the best of those sites. Sheer rock above and below where we dived on the south eastern corner. Not much more depth than 40m and great visibility. Crayfish, large congers, lots of fish and very colourful anenomes. A large angler-fish was seen here on the rubble at 40m. Great dive – exposed to tides so make sure divers are aware, have SMB’s and deploy if they start to move – next stop New York if you are swept off the rocks. Amazing topography and wheeling birds for the boat handlers to admire and a smashing site all-round.

It is possible to land at the Lighthouse stage (near the SW corner) but only in the most clement conditions and it should never be factored into a plan. Mooring would be tricky in all conditions.

After lunch we dived near to the South-West corner of the the Blasket. We just picked a spot that looked nice on the sounder. Fabulous dive. Max depth of 32m. Lots of boulders harbouring crays, lobsters and shoals of big pollack. Quite kelpy from 10m up but beautiful dive.

We also did a dive further west on the Great Blasket. A lovely dive as well with a boulder slope petering out into sand at 30m. Suspect that you’d get good diving anywhere on the southern side of the island. Keep an eye on the sounder and jump in whenever an interesting slope presents itself.

We went to Inis in a stiff northerly 4, gusting 5. Note that launching from Ventry you are in the lee for most of the trip but the tide is forced through the sounds between the Islands (particularly coming out between Great Blasket and Inisnabro) so be prepared for big seas on the passage. Its 12 nm to the island so if you can, plan to stay out there for the day rather than returning to fill.

We dived on the Thunder Rocks on the southern side of the island. There is an absolutely beautiful, sheltered bay (in a northerly) that harbours large population of curious seals and provides great place for lunch and to kit up. The bay has a large rock right in the middle that is covered at high water so observant navigation is required. The diving is on the obvious rocks to the south. We dropped divers in on the southern side and they worked their way around the rocks, at depths of 32 odd metres.

Amazing diving. Max depth of 40m but beautiful all the way up to the surface. Changing topography of huge gullies, massive boulders, overhanging walls dripping in jewel anenomes. Loads of fish life, nudibranchs, crays and lobsters – one of the best dives I’ve (JK) done in Ireland.  Watch out for tidal rips on the corners of the site and ensure that divers put bags up if they start to move. We had some divers enjoying totally slack conditions and others who experienced big tidal movements.

On the Monday the wind backed WSW and we launched out of Smerwick. This slip is good but quite steep so make sure you have enough people to help you launch and enough grunt to get the boat back out again. We dived on the Head, about 4 nm from the slip just to the south and west of an obvious rocky feature variously called the “Stegasoraus” (JK), “the Hedgehog” (AR) or “the Spine” (WF). Fabulous dive with max depth of 35m. Nice visibility, lots and lots of wrasse and dogfish in an topography of massive gullies leading seaward. Beautiful site with lots of anenomes, with scorpionfish and spidercrabs in amongst the shallower kelp.

Other things to note

We landed for lunch on the beach of Great Blasket. There is a small slip that the tourist boats access with a zodiac, you can get the RIB in but swift disembarkation is a must as the slip is very steep. There are moorings but these are used by large tourist boats so probably best to anchor off the beach. It is a fabulous beach with beautiful sand and lots of juvenile seals playing in the surf. Great place for lunch and you can visit the abandoned village which has lots of bird-life and hares living amongst the ruins. Recommended for lunch if the weather allows it. 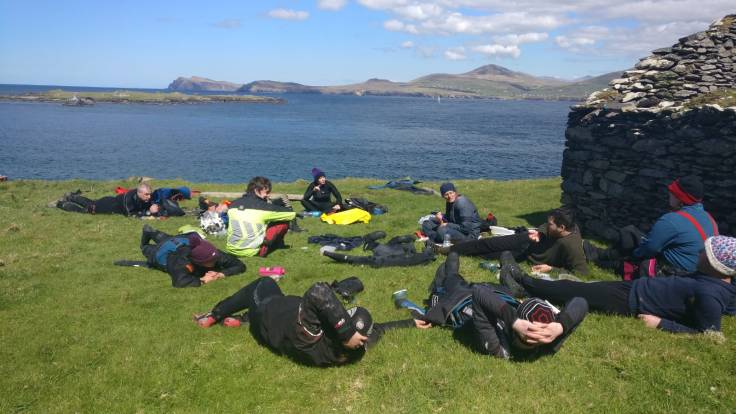 Lunch on the Great Blasket

We (2011) didn’t moor overnight in either Smerwick or Ventry but there seemed to be empty moorings in both.

In 2019 we stayed in the the Lipsole Holiday Cottages a few minutes drive from Dingle. There was ample parking for compressors and boats, and the local contact was Matthew Griffin +353 (0)86 2530446.

The owner’s name is Teresa and her number is: 086 3615358. It was very reasonable. Nothing swanky but absolutely great for our purposes and right beside Wine Strand slip.

It is walking distance from Tigh Bric. Lovely old pub and siopa. Big open fire and they brew their own beer – absolutely lovely place for post-dive pint. We had dinner in the Skipper Restaurant in Ventry. More expensive than some diving restaurants but absolutely beautiful seafood and well worth it – the owner is a charismatic frenchman – see if you can taste one of his oysters – absolute monsters and totally delicious.

We got fills in Dingle Diving who were very accomadating in terms of staying open and picking up.